The Gasworks…reeking of rock and roll

There are bars and clubs that book rock bands, and there are venues that ARE rock and roll.
The Gasworks in downtown Toronto was rock and roll. It had a vibe that got inside you even if there wasn’t a band on stage at the moment you walked in. 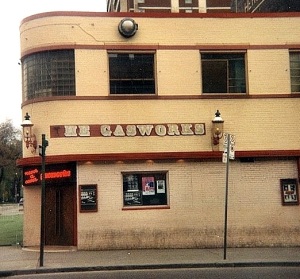 Toronto-born Mike Myers paid tribute to The Gasworks in the first Wayne’s World movie but that version was more of a warehouse and bore little resemblance to the room that was home to a who’s who of Canadian rock…Rush, Triumph, Lee Aaron, Santers, Anvil and many, many more bands that honed their chops in the Yonge Street bar.
During my college years, I actually spent more nights at Scarborough’s Knob Hill Hotel, and I still remember a joke told on Q107: “What’s the definition of a cultural event in Scarborough? Goddo at the Knob Hill Hotel.”
But it was just a room in a hotel. Nothing special and, on the one night I did catch Greg Godovitz and company at The Knob, one patron ran into the hallway and puked on the carpet as I was paying my cover charge.
Even the famed El Mocambo, where the Stones played in the late ’70s after Keith Richards was nailed for heroin possession by Canadian customs officers, seemed less than legendary. Notable for who played there, but that’s it.
The Gasworks put you in the mood to rock out, whether it was a band you knew and loved, or some hard rock act you’d never heard of but hey, they were playing The Gasworks so they had to be worth a listen.
The fries were awesome, the tallboys felt like they were going to bounce off your table because the music was so fucking loud, and even though there was a club up the street called Rock and Roll Heaven, The Gasworks earned that title and kept it till the very end, when the doors closed for good in 1993.
To paraphrase AC/DC, for those who used to rock at The Gasworks, I salute you.