The ideal listener or reader

In “Misery” Stephen King writes about a superfan who takes great offence when the novelist kills off her beloved main character.
She is none too pleased and if you’ve read the book or seen the movie in which Kathy Bates’s Oscar-winning villian exacts her revenge, well…. 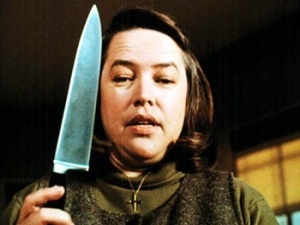 I have a superfan named George. Several years ago he sent me an email saying my show was the best program on commercial radio and he is a radio junkie. George listens to and follows all the major stations in the Toronto area.
So cheers, George. Your appreciation of the Rock and Roll Riot is greatly appreciated.
Such listeners are treasured by me and scores of other radio hosts. Sadly, it can go the other way. Go back 20 years or so and I had a super-sweet female coworker whose appeal attracted a nutjob.
She was in her early 20s. The “fan” was 40 years older and made a habit of showing up wherever my co-worker broadcast live reports from. Eventually, the company had to issue a restraining order against the lovestruck fellow.
Such are the perils of fame, even on a small scale.
If you are loved by thousands or even millions you will also be hated by some, and some of them will not be well-balanced individuals.
John Lennon was hunted down by a supposed fan. Rebecca Schaefer (co-star on the Pam Dawber sitcom “My Sister Sam”) replied to an admirer who showed up at her door and shot her to death.
Go back 10 years ago and I had a Myspace friend named Lyn who had a simliar experience. She met a guy online. He tracked her down and rang her doorbell.
Lyn survived, stayed off social media for a few years and returned using an alias.
I am Facebook friends with many famous people. They accepted my friend requests because I work in radio but I will likely never meet them in person. For example, Kim Dickens, who has been on the HBO shows Deadwood and Treme.
I would love to have a beer with Kim, but I keep my distance to respect her privacy.
Where am I going with this?
Social media has given us the illusion that we can connect with celebrities on Instagram and Twitter. Wouldn’t it freak people out if Rachel McAdams replied to an Instgram follower with, “Thanks for the compliment…we should hang out some time.”
Maybe I’m best off being a minor celeb with people who simply like what I do. All likers, no haters.

King always salutes his “Constant Reader” though his “Ideal Reader” is his wife, Tabitha. I create my show with an “Ideal Listener” in mind. Finding that person is what keeps Stephen and yours truly going.