Wanna be a success? Get off your ass

Posted on November 3, 2015 by johnnymaraca

I went to the library in search of research material for my radio show and ended up checking out Amanda Palmer’s “The Art of Asking,” and “Me, Inc.” by the blood-spewing, fire-breathing bass player from KISS, Gene Simmons. 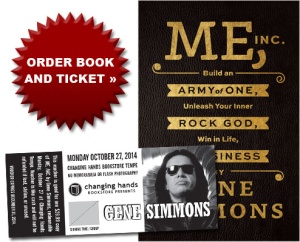 Palmer funded her album through a Kickstarter campaign because she asked fans for money (she’s also married to one my favourite authors, Neil Gaiman).
Simmons lacked a business degree, musical training and experience in a wide range of things to become highly successful in business, music and a whole lotta things.
If I can summarize his book, subtitled, “Build an Army of One, Unleash Your Inner Rock God, Win in Life and Business,” it’s this…
get off your ass.
Gene says stop watching TV, don’t bother taking up golf, don’t take vacations, don’t live (in the words of Loverboy) for the weekend. Spend your spare time bettering yourself. Read. Learn.
Then again, many of us heard that from our parents.
My Dad was fond of saying that the day you stop learning is the day you die…or something like that.
Simmons is a fan of entrepreneur and highly-paid motivational speaker Gary Vaynerchuk, who espouses the same ideas, mainly that after you come home from work, you have from 7 pm to 2 pm to learn skills and better yourself.
Dad didn’t have the internet. God knows he would have loved reading The Guardian or The Washington Post online (he did subscribe to Newsweek). He watched TV but preferred shows that had some kind of mental stimulation, whether it was 60 Minutes, The MacNeil/Lehrer Report or the clever dialogue that made M*A*S*H more than just a sitcom.
Is there a compromise?
Gene suggests there isn’t. Give up your extra curricular activities, and only become friends with people who support and nurture your development. Watch football with your pals at the local bar? You’re a loser, in his view.
Vaynerchuk has a series of videos and in one, says that the digital age actually benefits people over 40 because they have life skills and experience. So, rather than giving in and thinking the younger generation has an edge in this area, they should realize the opposite is true. Wisdom has its benefits.
Simmons is 66. Palmer, 39, and Vaynerchuck, 40.
Not exactly the 20-something Silicon Valley tech wizards we’ve come to think are ruling the world.
Bob Lefetz…the music blogger who has often taken issue with the entrepreneurial visions of the KISS co-founder…frequently rips into music industry folks who can’t accept change because in his words, “someone moved their cheese.”
One of my radio collagues clued me in to the meaning of that phrase. It’s a self-help book called Who Moved My Cheese, and the central theme of that guide is, anticipate, embrace and adapt to change.
Or get left behind, working a job that makes you eagerly look forward to going home, watching TV, and living for the weekend.
Or get downsized or let go.
With all due respect to Gene, and I still enjoy listening to KISS songs, I will combine his advice with Palmer’s, Vaynerchuk’s, Lefsetz’s and most of all, what Dad said (even if I rebelled at the time, what teenager didn’t? Well, probably not Simmons).
I will keep learning, reading, and trying to better myself before someone moves my cheese.
And I will sneak a peak at the TV. The Affair is on. Ruth Wilson is sexy as hell.