“Drinking is the curse of the writing classes,” said the great playwright and author Oscar Wilde.

I count myself incredibly lucky that, from my days as an adolescent when my parents allowed me to have a glass of wine with holiday meals, to the present, alcohol has always had the desired effect on me and nothing more.

It makes me feel happy, relaxed and I can consume as much as I want (my most recent hangover was Sunday morning) but I can also go days without beer or wine. 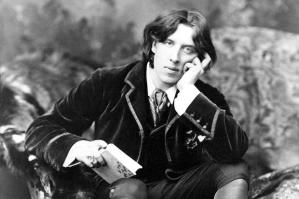 My Dad loved Oscar Wilde and I’m sure whatever wit I have came from him and the writer who, when asked at customs if he had anything to declare, said, “Only my genius.”

As I type this, I have had three pints of beer, with two charming ladies from my volleyball group, Rachel and Pam. Cheers!

And there is a glass of Jackson-Triggs cab-merlot next to this keyboard.

Not to make light of alcoholism or addiction. Booze has destroyed careers, marriages and ended countless lives. I’m not advocating abuse of any kind. I sympathize with any person who has battled those demons.

But, from Ernest Hemingway to Hank Moody, the literary process has often been powered by ales and spirits. 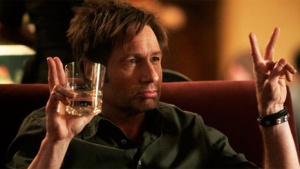 Ahh, Hank. I loved “Californication.” David Duchovny played a novelist whose debut novel was a hit with critics and got turned into a lacklustre movie. Hank spends the series trying to come up with a second novel and reluctantly writing screenplays for Hollywood drivel while succumbing to his additions to alchohol, drugs and women, often times all three in the same evening.

And, the journalist whose alchohol and drug consumption set the high (or low) standard, Hunter S. Thompson, drank bourbon with ginger beer. And fought off imaginary bats while driving around Las Vegas after downing all kinds of cocktails and pills.

I research and compose my radio show under the influence. Thumb through rock and roll bios and type on Tuesday and Wednesday evenings, then record my voicetracks and mix them with the tunes the following days. I have done the prep work totally sober and the results have been less creative. As I said earlier, wine loosens me up and connections magically appear.

Little Richard to the western swing days of KD Lang? Ahah. A preference for same-sex relations.

Not that there’s anything wrong with that.

Hang on. Have to fill my glass before typing the next part.

From what I was able to find on the Internet…hey, it’s the main source of information according to Mr. “7-11” who has “the best words”….Ernest Hemingway didn’t drink while writing, but summed it up nicely with these words: “Drinking is a way of ending the day.”

I’ll drink to that!

1 Response to Creativity fueled by booze