SCROLLING DOWN THE RIVER

I’ve managed to avoid thumb injuries on the courts and fields.

Share or repost this. No. There’s a good chance someone halfway around the world is getting paid by the click and exploiting a sad-faced little doggie to boost his income.

Maybe the puppy lover is also the blackmailer who crafts those grammar-challenged emails.

DO NOT IGNORE ME OR ELSE…

Let’s call him Sergei from Siberia.

“Hmm, what do I do today?” Sergei ponders his options. “Do I create a meme that will piss people off and force them to share with an OMG? Cha-ching! Or will type: I am SERIOUS do not ignore this email, I see you sick perv and I am now wanting to send your video to all your contacts. Do not INRAGE me I am fully knowing you are being happy to avoid embarrassment. You must send me $7,000 in Bitcoin and I will delete the files.”

Well, thanks for ensuring I never use Bitcoin, Sergei.

“Bitcoin, the preferred choice of thousands of blackmailers and scammers around the world!”

It’s giving me carpal tunnel from scrolling past the political rants and posts expressing outrage over whatever until I stop to check out an animal rescue video. They pulled the baby elephant out of that river!

I’m not being sarcastic in the latter case. I get misty-eyed when those creatures are reunited with their mothers.

ALWAYS LOOK ON THE BRIGHT SIDE OF LIFE

I enjoy viewing photos of my overseas relatives and proud parents holding their newborns, and finding out what’s happening in the lives of friends who live far away.

Think of the hours spent debating a story that would not have existed without camera phones, Facebook and Twitter. A non story. Whether you thought he treated the old man like a character at Disney World (look guys, an Indian!) or felt the teen was blameless…

All we got was a Zapruder-style video analysis that led to the inevitable name calling and insults.

Here’s a snippet from the Tech Crunch piece linked below:

During the last municipal election, The Wasaga Facebook news and commentary (umm, bitching) page featured non-stop attacks on the incumbent mayor and his opponent. The posts were often personal and nasty.

I felt bad for both of them.

Jarod Lanier thinks we should all quit social media. Here’s a quote from the article linked below:

His most dispiriting observations are those about what social media does to politics – biased, “not towards the left or right, but downwards”. If triggering emotions is the highest prize, and negative emotions are easier to trigger, how could social media not make you sad?

Filling you with sadness, depression, anxiety and rage. That should be part of Facebook’s mission statement, right below “It’s free and always will be!”

I wish Zuck’s World was a place where people were informed or at least felt they had a grasp of the situation, then reacted.

Yeah I know, what colour is the sky in mine?

Facebook IS free so I am free to scroll past anything that’s guaranteed to make me angry, and to avoid keyboard battles with folks who spend their days scouring the internet for proof of my cluelessness. 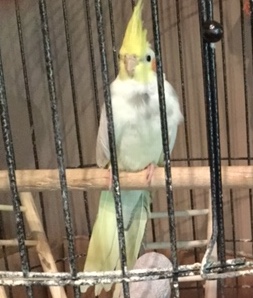 This is Ringo, my cockatiel. Cute little fella, huh?

His crest is sticking up, which means he’s worried or apprehensive.